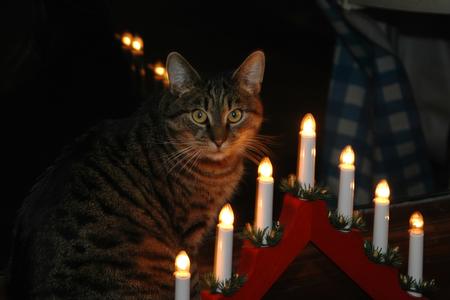 ​Sadly Bobby lost his fight with what turned out to be a pernicious digestive tract infection in June of 2016. We are crushed will always have a hole in our hearts.

Slide show is automatic or click on the first image below slide show and you can scroll through them all.

Of course our kids have their own place on this site. They are our little buddies; we adore them.

Our Cats Kinga and Bobby. We just love these two little guys! Bobby was a homeless cat who somehow was in our garden during a brutal winter in 2005. (probably lost as he was fully nourished). Feeling sorry for him we set bowls of food out which he happily accepted. He would not however allow us to approach him. We then began to leave him cans of tuna and slowly brought them into the house. After a couple of days of baiting him, he finally decided it was time. He walked up to Bob and jumped on his lap and has never left. We have called him 'the best cat in the world'. He loves everyone, is always curled up on our laps whenever the opportunity arises and has some of the traits of a dog. No matter where he may be - in the orchard in the back, across the road in the fields he will come when he is called - an amazing little guy. Kinga (female) came to us in a similar amusing fashion. As a kitten she was bought by our neighbours. At about 6 months of age she and Bobby met and they fell in love. We have a cat door and before we knew it she learned how to use it and she became a regular fixture in the house coming and going. Soon thereafter she made a decision and moved in full-time. We would bring her back to the neighbours however she would cry at their door and as soon as they let her out she would bolt to our house. After deliberations with the neighbours it was agreed that we would adopt her and  she and Bobby lived in wedded bliss.